HomenewsEurozone shows signs of bouncing back

Eurozone shows signs of bouncing back 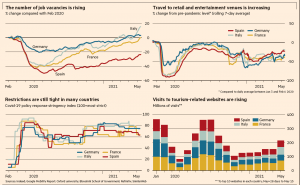 The eurozone economy has begun to recover from the coronavirus pandemic, according to high-frequency data indicators which offer early evidence that it will log a strong second-quarter rebound from its double-dip recession.

An increase in the number of job adverts, growth in travel to entertainment and leisure venues and rising holiday bookings all suggest that economic activity is bouncing back despite continuing restrictions to control the spread of the virus.

Angel Talavera, an economist at Oxford Economics, said: “The recovery has already started in the eurozone, based on several high-frequency indicators.” He expects eurozone gross domestic product to expand at 1.5 per cent quarter on quarter, in the three months to June.

The eurozone dropped into a double-dip recession in the first quarter of this year, its GDP contracting 0.6 per cent. By contrast, the US reported first-quarter growth of 1.6 per cent from the previous three months, and China announced a 0.6 per cent expansion.

Bert Colijn, an economist at ING bank, said that while the eurozone recovery may have been relatively slow so far, “signs for the months ahead are very positive”. Activity is rising sharply as restrictions begin to ease, “showing that voluntary social distancing is much smaller now compared to the first wave of the virus”, he said.

Alternative data have become widely watched since the pandemic began as they offer a more timely gauge of activity, although they are less comprehensive and reliable than official data.

The number of job openings is rising across all large eurozone economies, according to data from the job site Indeed.

Meanwhile, there are early indications that consumers are becoming more willing to spend money.

Retail and entertainment centres are receiving more visitors, according to Google Mobility data. German consumer spending in the week ending May 9 was just 3 per cent below the same week in 2019, according to Fable Data, which tracks bank transactions.

Ana Boata, economist at the financial services company Euler Hermes, said she expected consumers to spend some of the savings they stockpiled during lockdowns. The effect could be substantial: she estimates that excess savings worth more than 1.5 per cent of euro-zone GDP would be spent this year.

“There are signs of a start of recovery in May”, with “significant catch-up growth” expected in June and July as countries open up further, she said.

Covid-19 infections are falling in most eurozone countries and vaccination numbers are rising, so restrictions are expected to be lifted in many places in the coming weeks.

Europe’s hard-hit tourism sector is also showing signs of improvement. In the week ended May 15, bookings on websites Airbnb and Vrbo were only 4 per cent below the same week in 2019, according to AirdDNA, a rental data company.

A broader measure that includes the website Booking.com also rose this month, according to rental data company Transparent. Visits to leading tourism-related websites are rising, according to SimilarWeb, a company tracking web traffic.

However, there is still a long road to recovery: hotel occupancy for the next 90 days is below 10 per cent in many eurozone countries, according to hotel consultancy STR.

Manufacturing, which has propped up the eurozone economy in recent months, remains resilient, supported by rising global demand. By early May, the German truck mileage index — a proxy for industrial production — was well above its pre-pandemic level.

Europe’s leading industrialists are substantially more confident about the economic outlook than six months ago, according to a survey of the heads of 60 companies for the European Round Table for Industry.

“Europe’s CEOs and chairs see the light at the end of the tunnel,” said Martin Brudermüller, BASF chair and head of the ERT’s competitiveness committee.

However, performance beyond the second quarter is still in question. Silvia Ardagna, European economist at Barclays, warned of high uncertainty over new virus variants and “a big deceleration” in growth after the recovery phase when government stimulus is scaled down.

Brudermüller said: “While there is the promise of rapid recovery, we should not underestimate the risks . . . The Covid pandemic will have complex implications on business operations and consumer behaviour for the long term.”