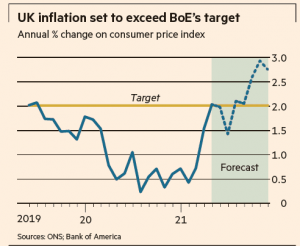 Will the Federal Reserve dare to mention tapering?

When Federal Reserve officials convene tomorrow for their latest two-day monetary policy meeting, questions over whether the central bank should start talking about tapering its $120bn monthly bond-buying programme will lead the agenda.

Since the US central bank last met in late April, several senior Fed policymakers, including vice-chair Richard Clarida, have opened the door more widely for a discussion about eventually winding down the pace of those purchases, which include US Treasuries and agency mortgage-backed securities.

The recent comments align with the latest Fed meeting minutes, which indicated that “a number of participants” believed it might be “appropriate at some point in upcoming meetings” to begin thinking about those plans if progress continued towards the central bank’s goals of a more inclusive recovery from the pandemic.

Recent economic data support this timeline. Consumer prices in the US are rising fast, with 5 per cent year-on-year gains in May revealed in last Thursday’s CPI report — the steepest increase in nearly 13 years. Additionally, last month’s jobs numbers, while weaker than expected, still showed signs of an improving labour market.

Most investors still expect the Fed to only begin tapering in early 2022, with guidance on the exact approach delivered in more detail around September this year at the latest. Goldman Sachs predicts a more formal announcement will come in December, with interest rate increases not pencilled in until early 2024. Colby Smith

Consumer prices in the UK have risen at an annual rate of less than 1 per cent for most of the pandemic because of low demand for goods and services and weak wage pressure.

But with the recent easing of Covid-19 restrictions releasing pent-up consumer demand, the nation’s headline inflation figure doubled in April from the previous month.

When core consumer price inflation data for May are released on Wednesday, some analysts expect an even bigger leap, predicting that annual CPI growth will jump to the Bank of England’s target of 2 per cent.

Robert Wood, chief UK economist at the Bank of America, said such an inflation surge would add to the BoE’s hawkishness. He also forecast further rises later this year as commodity price increases continued to elevate energy and food costs.

Additional price pressure would come from supply chain disruptions and higher transport costs that push up input costs. “The upside risks to our inflation forecast are growing from all angles,” said Paul Dales, chief UK economist at Capital Economics, who expected consumer price levels to peak at 2.6 per cent in November.

“The reopening may result in prices in pubs and restaurants climbing quicker than we have assumed,” Dales added, while labour shortages in some sectors, such as construction and hospitality, were also starting to push up wages and prices.

However, both analysts expect the increased price strain to be temporary.

“Once higher commodity prices have fed through to consumer prices, inflation will fall back again,” said Wood, forecasting that UK inflation would drop back below the BoE’s target in late 2022. Valentina Romei

Japan’s economic recovery has diverged from Europe’s and the US’s this year as it struggles with its Covid vaccination campaign and big cities such as Tokyo continue to be partially locked down because of the pandemic.

Although the nation’s wholesale prices rose at their fastest annual pace in 13 years last Thursday on surging commodity costs, Japan has otherwise faced a lack of price pressures compared with the US. That means that when the Bank of Japan concludes its two-day meeting on Friday, analysts believe it will not alter monetary policy.

“I don’t expect any change in policy,” said Harumi Taguchi, principal economist at IHS Markit in Tokyo. “They increased flexibility in March and I expect they will continue to watch that.”

After a policy review, Japan’s central bank in March scrapped its pledge to buy an average of ¥6tn ($54.8bn) a year in equities and the pace of its exchange-traded fund purchases dropped sharply in April and May. The moves signalled a shift away from aggressive monetary stimulus in favour of what the BoJ termed a more “sustainable” policy.

“Japan is one of the few countries whose property prices have not risen, and since rent is a major component of the consumer price index, it is not likely to see much inflation ahead,” said John Vail, chief global strategist at Nikko Asset Management in Tokyo.